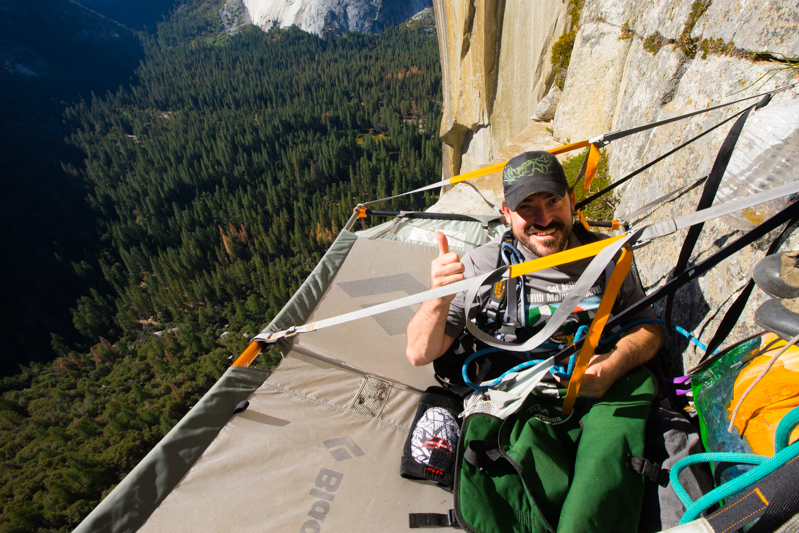 From racing his wheelchair at 56 miles per hour on the east coast to summiting El Capitan in Yosemite, one could say Enock Glidden is a motivated powerhouse. As a computer scientist, adaptive athlete and blogger, Glidden has accomplished a lot in his life despite being born with Spina Bifida, a birth defect of the spine resulting in being paralyzed from the waist down. This month, a film is coming out dedicated to Enock’s vision, journey, and triumph over climbing the Zodiac route on El Cap over the course of five days. The film “Enock: A Collaborative Ascent” documents the extensive preparation and network behind an adaptive big wall climb including the mentors, family, friends, and strangers committed to helping Enock achieve his dream. It is his mission to inspire and encourage people of all abilities to go out and accomplish exactly what they want, no matter what conventional expectations and limitations exist. In his words, “You never know what you might experience until you try.” 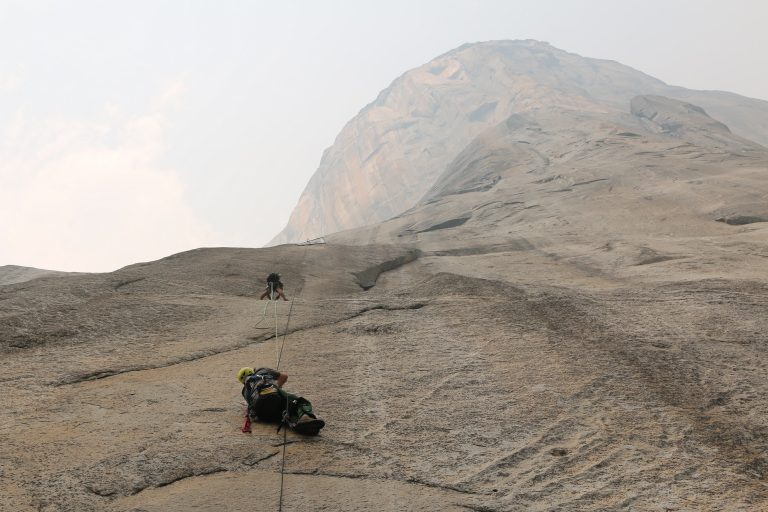 Paradox Sports: What was it like growing up with Spina Bifida and what led you to be so adventurous?

Enock Glidden: I grew up in a really small town in northern Maine called Patten. Only 1,200 people live there. Because Patten is so small, everybody helps everybody, and everybody knows everyone. I was the only kid in town who was in a wheelchair and I was sort of popular because of that. It was really cool to grow up in such a supportive environment. If we fast-forward to junior high, I met one of my biggest supporters- Bob Dyer. Bob was my physical education teacher. He pushed me to get into sports, set goals for myself, and try new things. Every sport he introduced to the class, Bob made sure of finding a way for me to participate as well. Growing up in Maine I played in the woods and all of that, but I never really got into organized sports until I met him. He pushed me to participate in basketball, tennis, and even hunting. He took me both alpine skiing and cross country skiing. When I was fifteen years old I started to race in marathons using my wheelchair. I was able to race in the Maine marathon three times before going to college. Since there were no other adaptive athletes in the area I would race myself, so it was all about beating my best time. Around that time I also joined the dodge ball team that allowed me to go on trips to places like Florida and Canada to compete. These trips introduced me to new adaptive athlete friends around the world. Bob really helped me foster the motivation to set goals and to go out and accomplish them. 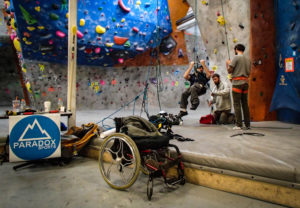 Enock during a Paradox Sports training, 2015

PS: After your childhood wheelchair racing days, what are some other goals you set for yourself?

EG: Once I graduated from high school, I focused more on school but still wanted to push myself. I studied at the Vermont Technical College where I earned my associates degree in rehabilitative engineering. Now I am working on receiving my bachelor’s degree in computer science at the University of Maine at Augusta. I recently had an internship with a California based tech company where I researched various ways to take marginalized populations on adventures through 360-degree virtual reality. Through this internship I was able to visit many national parks and adventure in a lot of unique places. I wanted people who have disabilities or are hospitalized to be able to experience these places through virtual reality.

PS: When did you start becoming interested in extreme sports and how did you end up connecting with Paradox?

EG: I skydived in 2003 but my internship in California led me to paragliding. I want to get into it more. I want to get a wheelchair motor for paragliding. As for rock climbing, I had a close friend growing up, Nick Hall, who ended up becoming a rescue ranger. Nick was killed in a rescue on [Mount] Rainier. Before the accident, he would always be posting photos of all of the amazing places he had been to. I wanted to follow his path and see what he had seen. Then I found Paradox Sports and their trip to the Gunks in 2013.

PS: What were some highlights of your first trip with Paradox Sports?

EG: I got to meet Sean O’Neill [first paraplegic to lead climb] and other awesome people. Meeting so many great people was truly the highlight. They fuel my passion for climbing. The community really helps push me to succeed in my goals. And then of course I also learned all these climbing techniques.

PS: How did your relationship with Sean O’Neill grow and what got you excited about climbing El Capitan?

EG: Sean really helped me take my climbing skills and techniques to the next level. He has climbed El Capitan multiple times and has accomplished a lot in the world of climbing. Sean said he would train and coach me. It worked out perfectly and it has become a great friendship. Two years after my first trip to the Gunks, I was working on getting a grant to ski in Alaska. The grant was coming too late so then I decided to look into climbing El Capitan. I had (ice) climbed Cathedral Ledge in North Conway with Paradox Sports and (guide) Nate McKenzie, which was about 200 feet. I realized I loved longer climbs. I wanted to go bigger. I enjoy being outdoors and I really wanted to do more. In 2015 I went to Yosemite [with Paradox Sports]… After getting there it became apparent I needed more training and experience. I needed to learn how to use the portaledge and what that entails. I needed to lock down my systems and techniques for figuring that out without the use of my legs. It was an eye opening trip and very telling of what I needed to work on. So we went back this past October to do the climb. I took 12 friends with me this time. It was tough not knowing anyone the first time. I took people from all over the country that wanted to help. All of these people were there only for this mission and they were all in. It worked out a lot better having a group of people set on the same goal. I had some friends from the East coast, friends from Paradox Sports, as well as people I have never met from Ohio.

PS: I am aware that you have a film coming out this year that documents this ascent of El Capitan. What can people expect to see in the film?

EG: I think the film will mostly be focused on the sense of community in the climbing world and how much planning and time it takes to make a mission like this happen. Another focus would be what it’s like for a person with a disability to live on the rock and what you go through emotionally. It will show the emotional ups and downs and what it takes to push through that. It is mind over matter, in a way, to complete the goal.

PS: Do you have any bits of advice for any future adaptive athletes thinking of attempting big wall climbs like El Capitan?

EG: Find support in the community that is willing to go all out in helping you meet your goals. You can learn from each other and support each other. The community aspect is my favorite part.

PS: How have you liked being an ambassador of Paradox Sports?

EG: I love it! I mean I basically have been all along. Paradox is the driving force that has propelled me in doing what I am doing. I want to keep up the momentum and help inspire others. 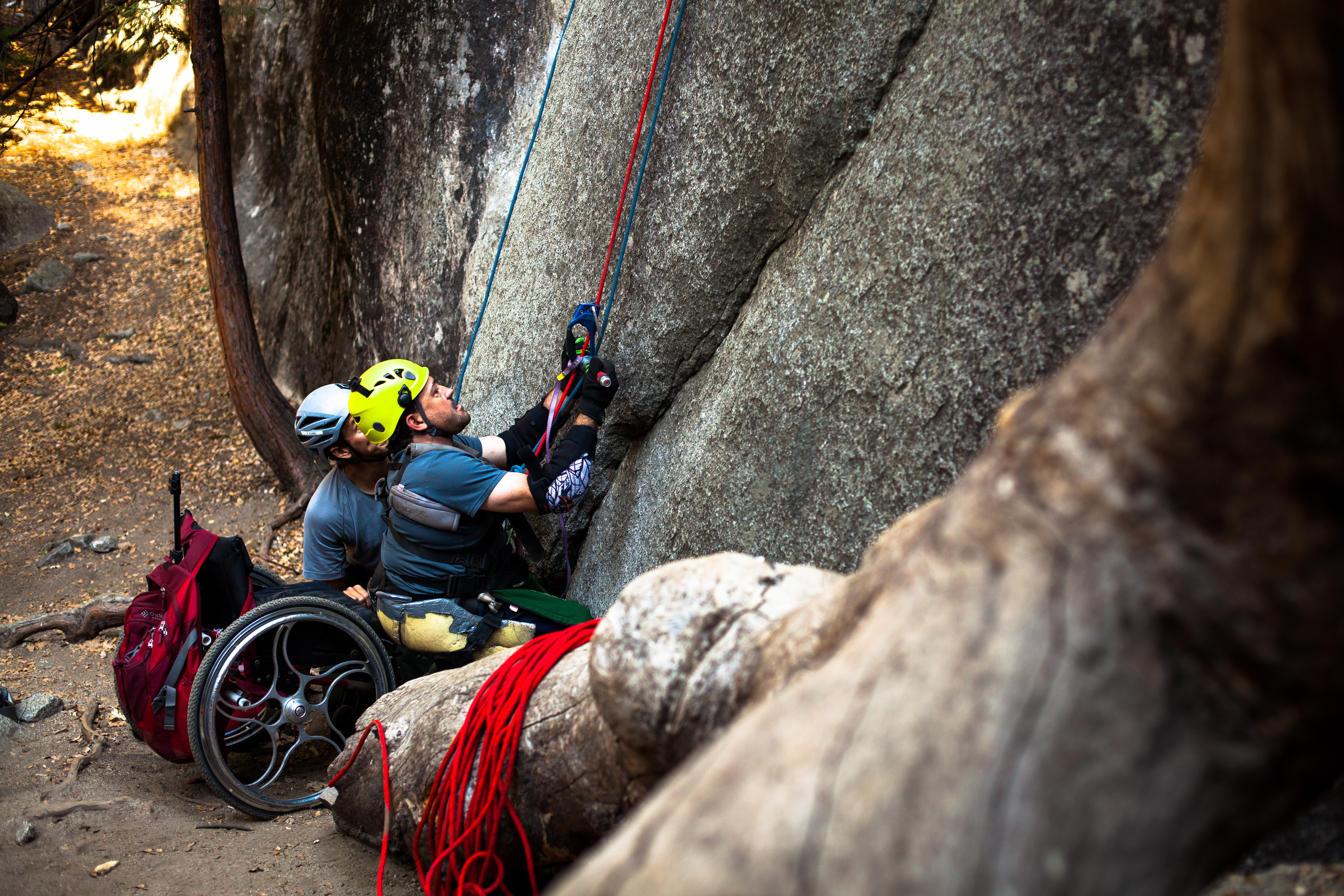