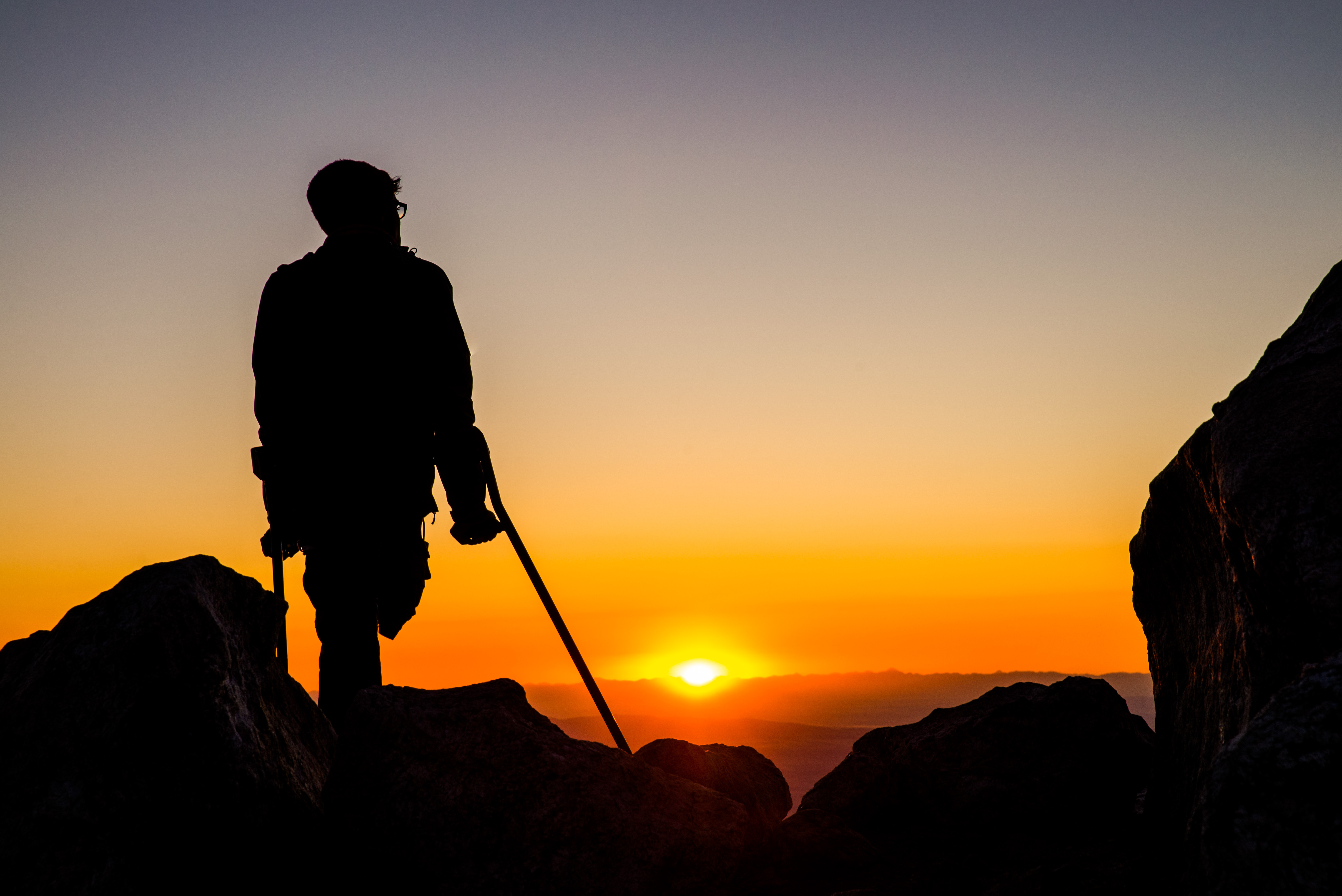 Sunset on the Grand Teton | Photo by Will Strathamm

Meet Vasu Sojitra: a 25-year old Adaptive Advocate and Athlete who joined the Paradox Sports Ambassador Team in 2014 after our trip up the Grand Teton – he became the first known amputee to summit the Grand without a prosthetic. You might recognize him from recent films A Grand Pursuit, Out On A Limb, or his skateboarding video that went viral. Vasu lost his leg at 9 months of age to a blood infection known as Septicemia and now uses his “Ninja Sticks” (aka forearm crutches) to charge hard! He grew up in Connecticut as a first generation American, lived in India for several years as a child and now calls Bozeman, Montana home, where he stays focused on his passions: backcountry skiing and helping other adaptive athletes find their potential.

SS: How did you end up getting hooked up with Paradox Sports?

VS: “Nate McKenzie (Paradox Sports Trainer) reached out to me, when I was still back east, about joining a Paradox [Sports] climbing trip in North Conway. That’s where I first learned about them. Then, when I moved out west, they contacted me to see if I’d be interested in joining the Grand Teton trip. The organization and the trip both seemed to fit my lifestyle and personality, so I signed on. That was really my first big mountain climb or hike.” 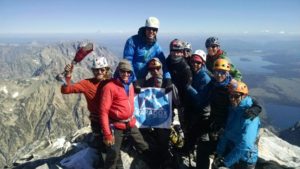 SS: What was your favorite part of that trip?

VS: “I’d say my favorite part was watching everyone on the trip adapt to the challenge and figure it out for themselves. The reaction from the guides was amazing, too. That trip really helped spread awareness through the guiding community on how to lead a trip like that. They realized they had to let go of some preconceived “the way I’d do it is…” ideas, and let individual folks figure out the movements and strategies that worked best for themselves. You can’t tell someone with one leg ‘I’d stem (using your legs to push against opposing walls while climbing) through that section’, you know?”

SS: What was the toughest part?

VS: “For me, the most difficult part was definitely the aftermath. The climb involves a ton of mileage and elevation gain. I was really beat up afterwards and could barely lift my leg.”

SS: You’ve really established yourself in the ski scene. How did you originally get into skiing?

VS: “It was tough to get included in a lot of things as a kid with one leg, so I used to follow my brother and his friends around. He started skiing when I was about 10 years old, and I decided to join in. I later went to school in Vermont and got more into skiing there. It took some time to get proficient at it, but I fell in love with it right off the bat. As my passion for it grew, so did the desire for bigger mountains, so out west it was. I moved straight to Bozeman and I’ve been there ever since. I also realized it was a great opportunity for personal growth in something I was really passionate about.”

SS: So, did climbing the Grand Teton get you thinking about going back to ski it?

VS: “For sure. It’s such a perfectly aesthetic mountain, it’s hard not to fall in love with it. The climb definitely sparked a flame in me to get a descent on it as well. I’m actually hoping to ski it in April or May of this year, potentially with Teague Holmes.” 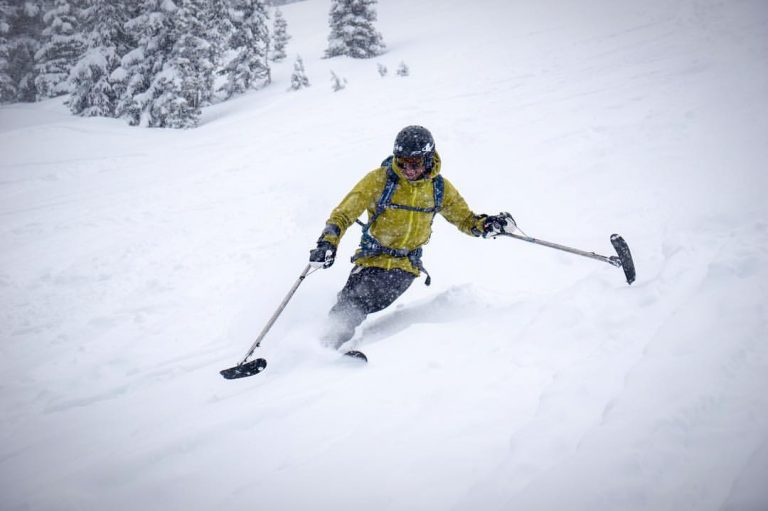 SS: Do you enjoy climbing for climbing, or do you see it more as a vehicle to get the goods for skiing?

VS: “I’d say it’s a hybrid. I enjoy the uphill, but mostly want to climb to grow as a skier. I have some pretty big goals for skiing, eventually, and you need to be a decent climber and mountaineer to ride a bunch of them. I’ve been skiing long enough now, that I also just feel more comfortable on my ski than on anything else. That being said, the rope skills in climbing are a lot of fun to learn. I went to school for engineering, so the technical systems are really great to play around with and figure out.”

SS: Do you feel confident with your technical rope skills now for mountaineering?

VS: “At the moment I’m an intermediate climber/mountaineer. I have led on rock, not ice, but I do see myself starting to go towards that realm. I do know how to rappel, top rope, and lead up to 5.9 sport routes. But I am working on getting my climbing and rope skills more adequate so I feel more comfortable in the mountains.”

SS: Living in Bozeman, have you done any ice climbing in Hyalite Canyon?

VS: “I haven’t yet. Conrad [Anker] keeps inviting me out, but I haven’t made it yet. I should probably make an effort to get out there with him though. When someone like Conrad invites, you kinda have to go, right? Haha! I know ice climbing will be a great skill to have when it comes to skiing some larger, more technical peaks so I’m excited to get into it a bit more. I’m also pretty coordinated with my crutches, so I feel like swinging ice tools will only be slight variation on that and I’m sure I’ll pick it up fairly quickly.”

SS: Speaking of crutches, how often do you have to replace your “Ninja Sticks” and do you call your ski “the Saber”?

VS: “I do!! As for crutches, I used to have adjustable aluminum forearm crutches that I would get through my insurance. I would break those every 2-3 weeks, depending on how aggressive I was during that stent. In 2012 I decided to invest in some custom made titanium crutches (insurance did not think it was necessary to pay for them), I’ve had them ever since. So it went from 2-3 weeks to 5 years. They are getting some stress fractures propagating, but nothing too concerning. I do go through my crutch tips about every year. It’s kinda like buying new shoes for my ninja sticks.” 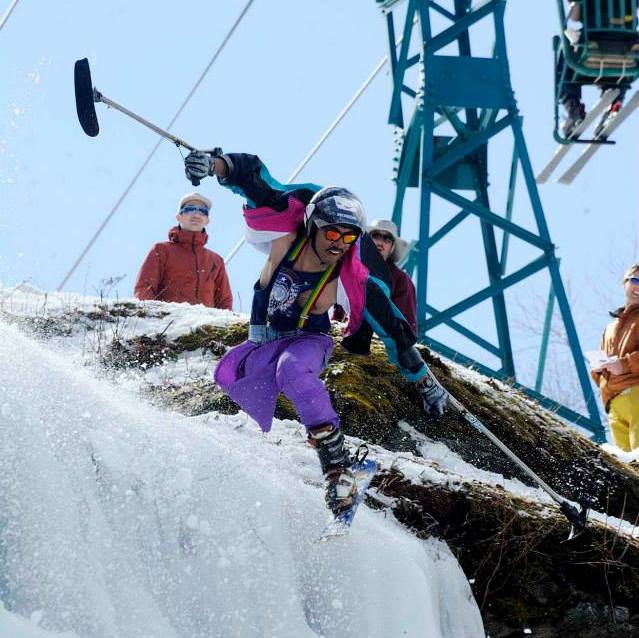 SS: Other than getting on the Grand [Teton] this spring, do you have any other big plans for skiing coming up?

VS: “I’m trying to make another ski film with T-Bar Films. I really want to ride some bigger lines to showcase being a good skier. The last movie was great and a lot of fun to work on, but I don’t think it necessarily showed my full ability. I’d really like to ski some bigger peaks, like Rainier, and some of the other Pacific Northwest volcanoes. Eventually, I want to ski Denali, but that one is pretty low on my priority since it’s such a big undertaking. I want to get some good lines in locally, too. The Bridgers (Bridger Mountain Range, MT) have a ton of awesome skiing. Hyalite is great, but some of the approaches are high mileage and pretty gnarly. Since the movie, I’m also really excited to get back to the Chic-Choc mountains, north of Maine, in St. Lawrence Bay. They’re only 4,000’ mountains, but almost entirely alpine terrain, so they really have the feel of much larger peaks, and the skiing is incredible.”

SS: Tell us a bit about your job and your role as Ambassador for Paradox Sports.

“I am the Adaptive Sports Director for Eagle Mount Bozeman. This involves heading up our Bridger [Bowl] Ski Program in the winter for over 200 skier with disabilities and 300 volunteers that help out with those lessons. I also overlook our cross-country ski program, which has it’s own coordinator. In the summers I am in charge of our Adventure Day Camps Programs for over 100 campers with disabilities. Our day camps include anything from rafting, kayaking, fishing, hiking, and cycling. On top of this, I’m really pushing to grow our climbing program so we can start getting campers outside. We try to do it all with our campers. My work has definitely put me more on the map here. Eagle Mount is a very established organization in our community so having someone with a disability running some of their major programs has grown my influence within the full spectrum.

Paradox [Sports] has grown my personal network, for sure. They work with both higher end athletes and folks from everyday life. It’s been great being involved with an organization that gets people outdoors for the enjoyment of the experience, rather than just trying to be the fastest or strongest in some event or in a training facility.”

SS: Do you have any tips or tricks you’d pass along to someone potentially looking to become an adaptive athlete?

VS: “Patience. Patience is a huge aspect. You have to go into it realizing that you won’t be great overnight. I didn’t just end up here with my skiing. It took me ten years to become what I’d call proficient, and another five to really push myself to get better. Realizing it will take some time to get good is a great start, but dedication and perseverance are also key. Any time you’re trying to get good at something, you’re going to fall; probably a lot. Mentally being able to get back up and keep going even when it’s rough will guarantee you a better shot at success though. That’s a life lesson you can apply to anything.”