Skip to content
Concepts to challenge community: A history of gear in the Gunks

Concepts to challenge community: A history of gear in the Gunks

Approximately 470 million years ago the minerals that make up the Shawangunk Ridge began to settle. Now a visitor to New Paltz, New York will certainly notice the quartz conglomerate that makes up these incredible walls that seem to rise directly out of the farmland below. The mineral makeup of the cliffline is extremely solid, and has a rating of 8 out of 10 in comparison to the durability of diamond. This defining characteristic of the stone has provided the opportunity for glaciers, oceans, and the ages to mold the surrounding landscape to the unabating rock walls- creating the ultimate climbing destination for those willing to test their grit on the indicative overhanging roofs of the area. 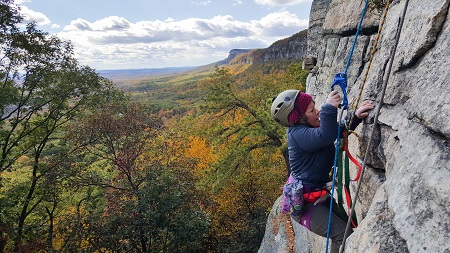 Considered by many to be the cultural epicenter of climbing in the Northeast, ‘The Gunks’ is affectionately known throughout the world as a paradise for climbers who practice the art of “Clean Climbing” with traditional gear. Although this style is what majority of climbers know today – the concept was on the fringe in the 1960’s as climbers feared moving away from the iron pitons and hammers of the early first ascensionist. The historical iron craft was efficient and worked well, but it destroyed the rock irrevocably. It wasn’t until climbers began using ‘chocks’ that the future of climbing was no longer in jeopardy.

Chockstones were historically used by climbers in the UK. The bold lads and lasses would fill their pockets with stones before tying in for their climb, then slot the stones into cracks or fissures in the rock. Once the rock was set into place, a sling of rope or webbing would run around the chockstone and be clipped to the climbing rope for protection. This theory eventually progressed into the use of machine nuts and other creative elements being implemented at the crag. In 1961, the first official ‘Nut’ for climbing was created by a blacksmith in Sheffield, and the climbing world was changed forever. 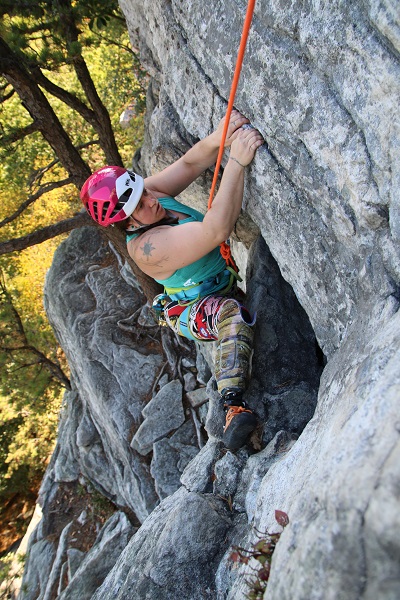 An ethical dilemma was presented to the modern day climber; To hammer, or not to hammer? That is the question. During these nebulous times there were a few climbers who began to push the limits of clean climbing. To be noted, the 1967 Royal Robbins all clean ascent of ‘Nutcracker suite’, a 5.8 in Yosemite Valley, was the hardest clean route done to date – done purely on nuts. Shortly after, climbers in the Gunks began to question their own historic ascents and local climbs. Was the destruction worth the summit? For many, the answer was rhetorical and clean climbing seemed to be the only way forward. This led to the appearance of a “All Nuts Ascent” book on the counter of the famous Gunks gear shop Rock and Snow in 1970. A log book created to encourage a clean-climbing revolution. Two years passed, and the book was completed. All the historic ascents in the Gunks had been officially climbed clean, and Rock and Snow pulled their inventory of pitons and hammers off the shelves.

Today, the privately owned Mohonk Preserve is home to a majority of the cliffs, as well as 8000 acres of pristine lands, that have been protected since 1963. They prohibit the use of hammers, pitons, and bolts – and try to keep the climbs as natural as possible. Thanks to the Mohonk Preserve, and their associated trust, over 80,000 climbers visit New Paltz each year. These athletes now provide economic value to the town, as well as paying admission for the preserve to maintain trails, provide restrooms, and supply one of the best rescue squads in the country if something goes wrong.

Since 2012 Paradox Sports has been attempting to make this destination climbing area even more accessible. Our goal has always been to provide climbing opportunities for those who may not receive the support they need to make their climbing dreams come true. The first program at The Gunks in 2012 was led by the Program Director Mike Reddy, with support from Executive Director Timmy O’Neil, and current Northeast Program Manager, Nate McKenzie. There were eight climbers on this inaugural trip working with guides to find the best solutions for adaptive climbing systems. An example of the diversity of disability; as there were climbers with visual impairments, amputations, paralysis, and nervous system disorders all climbing and camping together.

Since our first trip to the Gunks in 2012 Paradox Sports has grown from a small organization into a national thought leader on Adaptive Climbing programs and education. We continue to offer an annual trip to the Shawanagunks each October, with demand continuing to increase for our “most accessible” annual trip. Of course our programs have gone through changes, much like the climbing community has gone through changes. In the past, we used rugged equipment compared to our perfected systems of today. Our presence at The Gunks is welcomed from the campground, to the ranger station. No matter the climbing style of the Paradox Sports group, it is clear that we are there to push boundaries, and change the future of climbing as we know it. 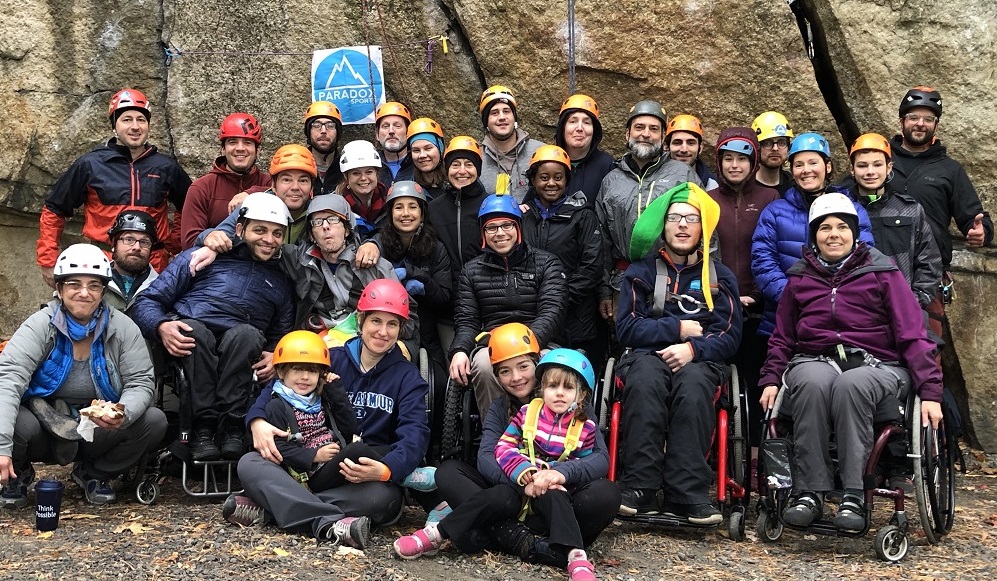 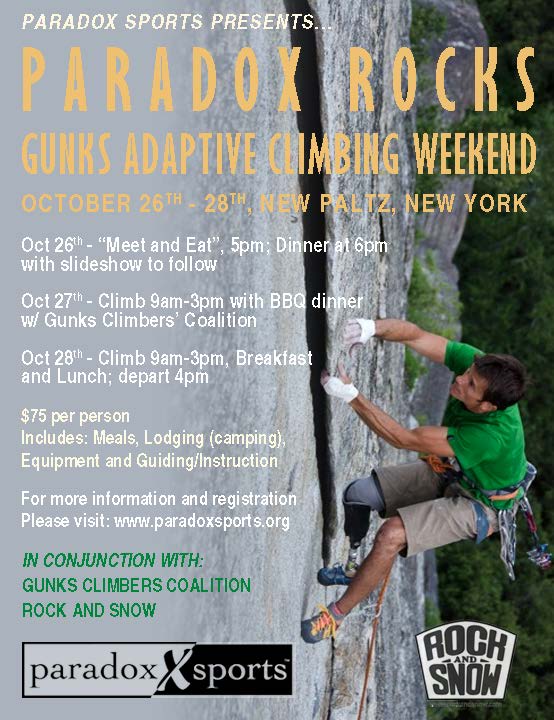 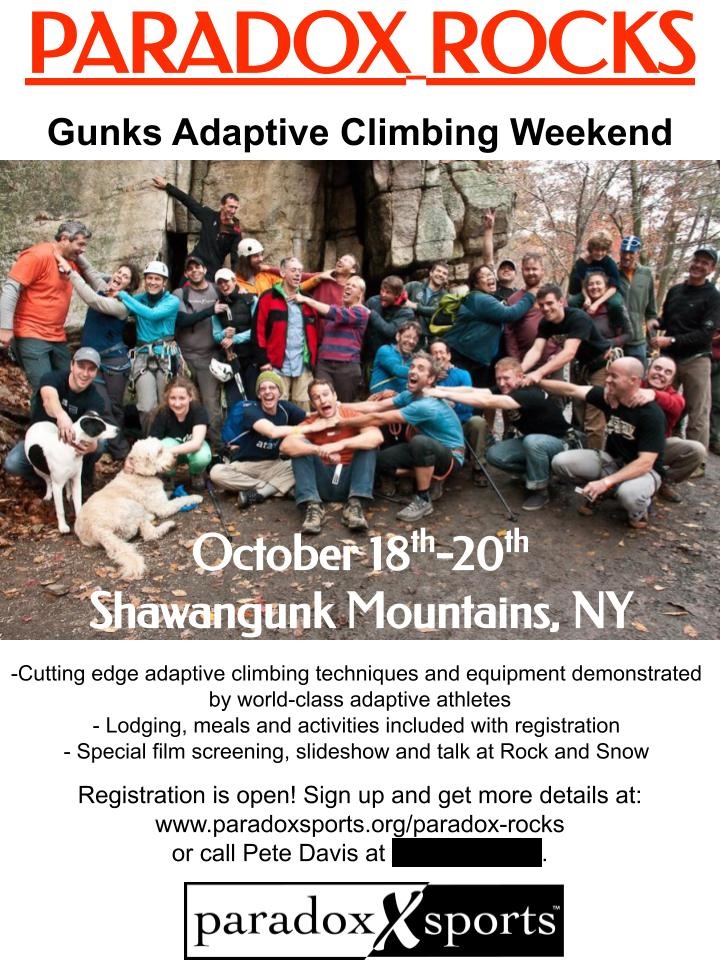 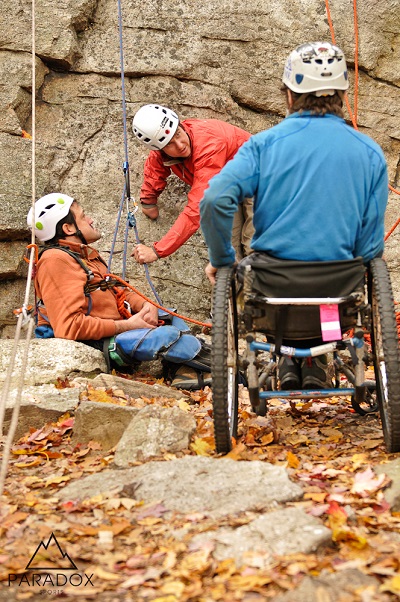