I might be scared of falling but I still love rock climbing. Climbing is still very new for me as I have been focussing on nordic skiing to qualify for Beijing 2022 for the past four years. Luckily all the hard work and time was worth it because I went to the Beijing 2022 Paralympics in March! 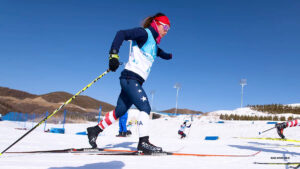 After returning from Beijing I only had one week before I needed to be in Alabama for Paraclimbing Nationals! I climbed every day

before the competition but I felt unprepared and undertrained. Once at Nationals in Alabama my nerves were in full force for the first round of qualifications as I only had a week in between competitions.

I was sweating so much, for the first 3 rounds of climbing the protective tape for my arm kept slipping off causing me to fall off of

my routes. After pausing to settle myself in this new competitive world, I was able to continue climbing with more focus. After settling my nerves down, I made it through finals and placed 4th in the overall competition!

I’ll be joining the US Paraclimbing team in May to compete in the Salt Lake City World Cup! Rock climbing and skiing are such different sports I wasn’t sure how I would do. In skiing, I have to mentally prepare myself for a 15k while in climbing I have to prepare to climb a vertical wall. I love rock climbing because of the active puzzle you have to solve. When I climb, it is one of the few t

imes I’m not thinking about anything else. It is also really nice for a change to not be in the freezing cold! Unless I am ice climbing.

It was so inspiring to see other people climb with one arm just like me. Usually, when I go rock climbing I am the only adaptive climber in the gym. I remember as a kid I never saw another person with one hand until I was 18 at my first international ski race. Looking back I hope that I can show every little girl and boy out there that you can do anything you put your mind to. Thank you so much Paradox Sports for sending me to the US Paraclimbing Nationals. This is hopefully just the start of my rock climbing career!