I learned about Paradox Sports’ Grand Teton climb as Kabul was falling.

The dramatic collapse of 20 years of U.S. foreign policy kept me glued to social media. I’d spent years flying C-17s, including more than 200 missions in Iraq and Afghanistan. Now I had friends flying desperate evacuation flights out of Kabul. I watched Facebook for any new scrap of information.

That was how I stumbled across a post from Paradox co-founder and military veteran D.J. Skelton, recruiting for an upcoming veterans climb up the Grand Teton.

The mountains had always been my solace. Climbing the Grand Teton with a group of veterans sounded amazing, but I thought Paradox only worked with adaptive climbers.

D.J. informed me that this trip was different. Every September 11th week, Paradox hosted two climbing trips for veterans. They welcomed all veterans, wounded or not. 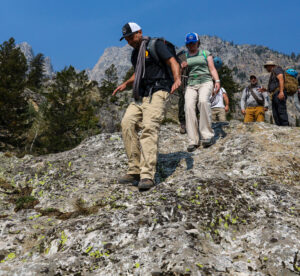 As I prepared, I wondered how hard the Grand Teton would be. I had lopsided abilities. I regularly climbed outdoors, but always on single-pitch walls in walk-in crags. I had no experience with mountaineering or the alpine environment.

When I stepped off the plane at Jackson Hole and caught my first glimpse of the Grand Teton, I felt a prickle of fear. The peak looked formidable.

That was good, I thought.

I liked to climb at the edge of my abilities, where challenge brought growth. A little fear meant I was on the right track.

The climbing excited me, of course, but what really brought me to the Grand Teton was the promise of community.

I have always been introverted. My day job as an Air Force professor kept me in my head most of the time. A cross-country Air Force move had uprooted me from my community, and in the COVID-19 era, I found it hard to put down new roots. I was approaching my 20-year military retirement, anxious about transitioning, and asking hard midlife questions.

I commissioned as an officer just months after September 11th. I’d spent my entire career engaged in the United States’ wars against terrorism and now, in one disastrous month, everything we had built at such high cost seemed to unravel. The Afghan government’s collapse raised hard questions about the sacrifices our country and Armed Forces had made.

I felt a barrage of emotions like grief, guilt, and shame. Mostly, I processed these alone. Climbing had helped sustain my mental health for years but what I really yearned for now was community.

The idea of climbing the Grand Teton with a group of veterans sounded deeply appealing. Even so, I had no idea what to expect. More than anything, I felt curious. What would it feel like to join a team on a Paradox trip?

We based in the rustic American Alpine Club’s Climbers Ranch, nestled on the plain beneath the ominous mountain skyline. I met the other seven veterans and three Paradox staff as they arrived. Even with the busy schedule over the next four days, we had leisurely breakfasts and evening hours to continue these conversations. My colleagues embodied everything I’d come to expect and love in military veterans. They were team-focused, goal-oriented, adventurous, and funny. We bonded easily.

We spent two days with our amazing Exum Mountain Guides, learning the skills we’d need on the climb: gear, knots, movement over rock, belaying, rappelling, and communication.  These skills were not particularly difficult for those who’d climbed before, but I marveled at my colleagues with zero experience who tackled multipitch climbs and overhanging rappels on their first day.

It surprised me how little we talked about our military service. Oh, it came up here and there. I got glimpses into my new friends’ life stories. Each person brought something to the mountain. A few had physical wounds. For most, the wounds were less visible. Some faced hardship in their personal lives. All of us, I think, felt the weight of twenty years of war. 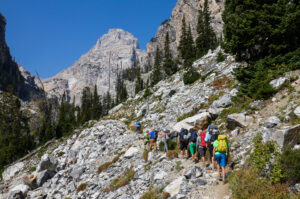 But you would never have known that, spending time with our group. What defined my teammates was not their baggage but rather a deep commitment to growth, renewal, and continually expanding their limits—all within a team. We told stories. We laughed. We shared sunscreen and trail snacks and swapped gear and engaged in a thousand other small acts of mutual generosity and support.

We didn’t need to talk about the past, I realized. The mountains were enough.

On our third morning, we began our ascent up the Grand Teton. Three miles of forest switchbacks gave way to strenuous uphill hiking through scree and boulder fields. We helped and cheered and encouraged each other along. When our guides raised the possibility of dividing our team based on skill level, our response was swift and unanimous: we would summit this mountain as one group.

That night we camped at the Lower Saddle, at 11,700’ feet. We feasted on cold, foil-wrapped pizza, drank hot tea, and nibbled on chocolate for dessert. We repacked gear, laid out sleeping bags, and watched the evening shadows crawl up the steep, shattered granite still above us.

We rose at 0400, sipped instant coffee, and ate breakfast by headlamp.

At last, we started our ascent.

After trudging up a steep scree field, we each roped up with a partner and guide. My partner was Bruce, an Army veteran who had never seriously climbed before this week. After each harrowing move over exposed ledges, we fist-bumped. “Good job, brother,” became our mantra. When Bruce reached the “crawl”—a famous stretch of the Owen Spalding route that requires edging out over a vertical abyss—he didn’t hesitate. Finally, after seven short pitches of roped climbing, our guide stepped aside so Bruce and I could take the lead.

We scrambled up the final steps to the summit. There we grinned and embraced in the cold, clear air. Two by two, the rest of our team joined us. We all whooped and cheered and hugged and fist-bumped. One vet—severely wounded in Iraq many years ago—cried as he told us this was the hardest thing he had done since being wounded. His vulnerability opened the floodgates for the rest of us. 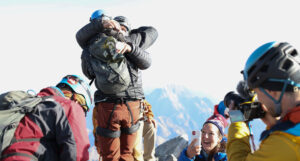 It was the summit experience every climber hopes for. Yes, the climbing was fantastic, but the trip was never really about the climbing. Climbing simply became a vehicle to confront ourselves—with all our hopes and fears—and emerge stronger. Our wonderful team provided mutual support and encouragement every step of the way.

I’m not sure exactly what I was looking for on this trip, but I’m satisfied that I found it. During our descent back to the waiting world, I had much to ponder. At a time when so much in our society seems broken, the trip reminded me of enduring core values: Brotherhood (and sisterhood!). Mutual caring. Encouraging each other—and sometimes hauling each other—onward. The healing power of nature. 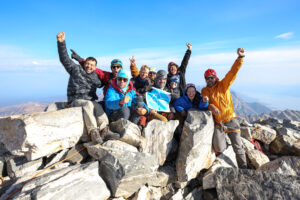 As we prepared to descend, one of our guides swept his arm around, indicating both the shattered granite peaks and our own little tribe, standing in a circle in our puffy jackets and helmets and climbing harnesses. He said, “THIS is civilization.”