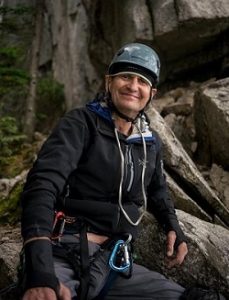 This is a guest post by our friend Wayne Willoughby, an adventurer overcoming the struggles of Post Polio Syndrome. Wayne Willoughby contracted paralytic polio as a baby and has had numerous surgeries and debilitating post polio syndrome ever since. He is an accomplished adaptive climber with 40 big wall climbs under his belt. To name only a few of his accomplishments: first adaptive ascent of the Chief in 1998, climbing the Nose of El Capitan in 22 hours with Hans Florine and Tico Allulee in June 2006, and in 2016 the Black Canyon of the Gunnison with Paradox co-founder Timmy O’Neill. You can read more about that trip on the Patagonia blog here: Power of the Possible: Climbing with polio in the Black Canyon of the Gunnison by Timmy O’Neill.

At 6:30 AM, on June 26th, 2018, I met up with my friends Kieran Brownie and Luke Cormier for my 8th long route on the Chief, in Squamish B.C.  Our objective was the seldom done Aid line that goes up the middle of the imposing Sheriff’s Badge.  Kieran chose the route due to its steep and overhanging nature, for which I am much better suited for than many of the slabby low angle pitches that dominate so many routes on this stone.  (The latter require me to essentially drag myself up much of the way). The challenge 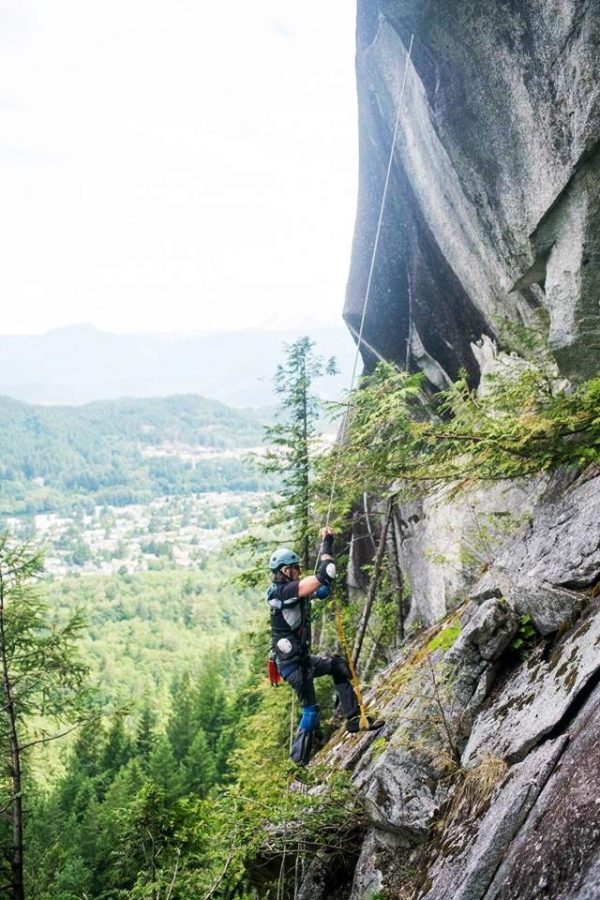 of trying to be the first team to do it in a day, (that we are aware of), was an additional motivating factor.  In 1999 my friend Chris Geisler and his partner were on a pace that would have seen them break the 24-hour mark, but Chris took a fifty-foot fall, and in addition to other injuries, suffered a broken leg.  The fact that this was going to be my 40th big wall and was transpiring on the 20th anniversary of my first Chief ascent added even more meaning.  Milestones like those can be easily taken for granted.  Not for myself, however.  I have worked far too hard, in an effort to overcome inconceivable adversity for each decade of my life to see what we were doing on this day, in the middle of my 65th year on the planet, as anything but ordinary or commonplace.  Paralytic Polio at nine months of age, my constant and challenging companion Post Polio Syndrome, which I have dealt with since I was 9 years of age, surgeries related to the Polio throughout my childhood and beyond, cars hitting me as I rode my motorcycles and bicycle, and more than a few mean-spirited people who have intentionally assaulted me, have collectively made each and every day a significant challenge.  But for having known so much adversity, all the more do I appreciate the many blessings in my life.  Not the least of which is having partners and friends like Luke and Kieran, without whom I would not be afforded the opportunity to venture high off the ground and find out what I am capable of.

As we hiked our way up to the base of the Sheriff’s badge, I used every one of those muscles and all of the tricks that I have learned to compensate for the areas of my body that are bereft of muscle.  The forest below the Badge is an enchanting place, with boulders scattered about that were once part of the wall above – a reminder of the impermanence of things, and the one thing that we can always count on, change.  The challenge for me on the way up was to attempt to remain in as physically static a state as possible.  A fall on any of the tricky sections, not minor challenges for me to navigate, would have meant the end of our day, and another period of recovery for me.  That knowledge kept my focus razor sharp and allowed me to move through each hazardous section without even a stumble – alternately using my poles to propel myself where it was feasible, and setting them down to grab branches, crimp features on boulders and crawl climb areas where it wasn’t.

Arriving at the base of the route and looking up at the many difficult pitches, and the imposing roof high above is likely part of the reason that this incredible line may only see an ascent every other year.  In spite of the thousands of climbers who visit Squamish every summer these days. There was a tricky bit for me to get to the start of the first pitch, so Luke led it, and trailing my rope behind him, fixed it for me to jug up through the trees to where the route starts in earnest.  Our spirits were high, and smiles were plastered all over our collective faces.  Luke dispatched the 5.6 pitch that starts off the route quickly and mentioned something about things getting more serious from here on.  The A2 pitch that came next was a beauty.  Luke was styling it with confidence, sending down monkey calls, and as he got higher, asking for more gear to be tagged up.  It was then that Kieran realized that somehow our rack was a little light.  Oops.  A call to Paul McSorley in town was answered, and he was at the base with the gear that we would need to complete our ascent in short order, saving the day.  Thanks again for that kindness, Paul!  Luke slowed down a bit on the A3 pitch that came next.  This one had big fall potential, but Luke was up to the challenge and looked solid from start to finish. any of the tricky sections, not minor challenges for me to navigate, would have meant the end of our day, and another period of recovery for me.  That knowledge kept my focus razor sharp and allowed me to move through each hazardous section without even a stumble – alternately using my poles to propel myself where it was feasible, and setting them down to grab branches, crimp features on boulders and crawl climb areas where it wasn’t. 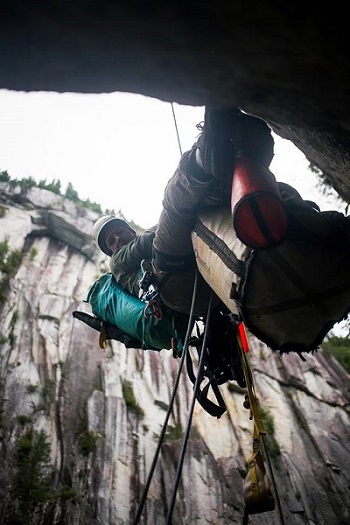 The sun was getting higher in the sky, but we were blessed with cloud cover, and cool enough temps to require me to put on a light jacket when the wind picked up.  This was a far cry from conditions during my summer ascents on El Capitan.  On one, two summers ago, the mercury had soared to 107°!  One of my partners for that one was the late Tim Klein, a dear friend who passed away as the result of a fall on June 2 on El Cap, along with another friend, Jason Wells.  It would have been Tim’s 107th ascent of El Cap, all in under 24 hours.  Luke and Kieran had also lost a very close friend this year, Marc-Andre Leclerc, swept away by an avalanche after having summited a new route on the North Face of the Mendenhall Tower in Alaska.  Throughout the climb, we told stories about their bold adventures, the incredible people that they were, and what profoundly positive effects that they had had on our, and so many others lives.  We were exceptionally fortunate to have brushed shoulders with these bold visionaries.  A quick google search of their names will have your jaw hanging in amazement at just some of what that they accomplished. The world is a far poorer place for having lost them. 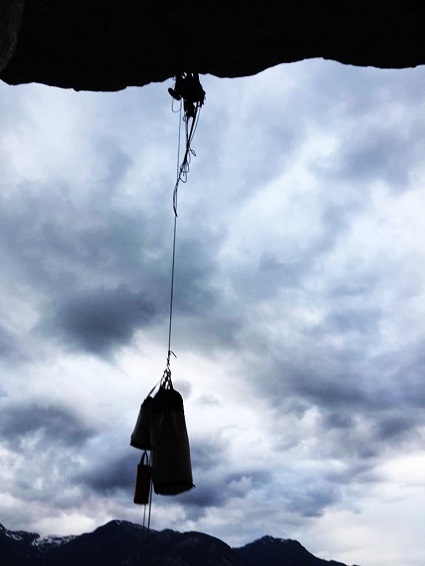 Kieran Brownie on the roof | Photo by Luke Cormier

It was after ten PM when I finally needed to turn on my headlamp.  I needed it often to make sure there were no instances of crossed lines before we left each belay, as these could lead to clusters that could stop us in our tracks.  More than a few big wall teams have bailed after one too many of these scenarios.  Our badass, but always cheerful partner Kieran, kept the ropes moving up in a relatively rapid manner, for such seriously difficult pitches.  The pitches that followed went A3, A3+, an A2+ pitch that went up and over the roof, and an A2+ pitch to the ledge above.  In the early morning light, this awkward pitch required me to dig deep into my book of adaptive climbing tricks picked up over the decades on this mysterious and extraordinary stone, also on El Cap, where I did my first big wall ascent 28 years ago, in Zion and Towers in the Utah desert, on the Diamond in RMNP in CO, and the Black Canyon of the Gunnison in CO, amongst others.  As I got a few feet from the top, and took a moment to marvel at the views that I was rewarded with of the Howe Sound to the south, and Mt Garibaldi to the north, I was reminded of the first time that I was fortunate enough to be here, in 1998 with my friend Mark Ballard, when we did the first adaptive ascent of the Chief.  It was only my second push of a big wall, and not an insignificant accomplishment for me at that time. Kieran greeted me with a smile that covered his face as I topped out, and we laughed the laugh that is earned after pushing yourself in a manner like we had just done.  Digging deep, we managed to get in the first one-day ascent of this line, in 21:55.  Records are made to be broken, and I am certain that someone else will come along and take this one, but we were able to be the first team to have done this route in a day.Kieran took over the lead for pitch 4, an A2+ beauty that he hiked up. Once he had my line fixed, I moved at a pace that could have been faster, but with a still-healing left wrist that had been badly sprained in Feb, I wasn’t able to pull myself up with that hand with as much force as I will be able to once another block of months has passed.  But I wasn’t going to let it get in the way of doing this climb, and it held up nicely as a result of my adapting my jumaring technique, alternately using my left leg or right hand as my main means of moving myself up this face. The long day continued, and as Kieran styled the first of the A3 pitches on his block, Luke answered phone calls from contractors related to the house that he and his wife were building (there was rain in the forecast, fill dirt for part of the foundation on the way

the next day, and there was lumber that needed to be covered, among other things).  That he made the time and was so psyched to be up there with us amidst all that he had going on with the construction, a two and a half-year-old son, a three-month-old daughter, and a demanding job in the film industry in Vancouver made me feel especially fortunate to have him and his constantly cheerful countenance along. When I told him how lucky he was to have a wife like his, who supports his passion for participation in this arena, with a bit of emotion in his voice told me how much he loves her and how blessed he feels to have her to share this life with.  I thought of my own lovely wife, and how supremely fortunate I am, as well.  Big wall climbing can be a cathartic experience that brings out emotions and feelings that put us in touch with a side of ourselves that is not always on the surface. And, it can help to remind us of what is really important in this life. 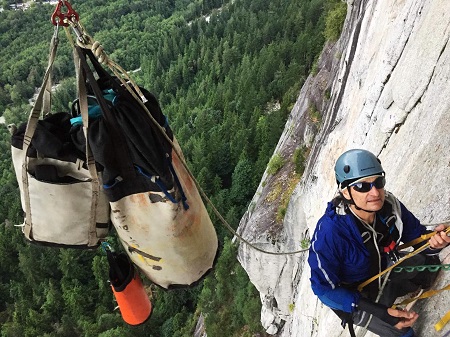 Wayne on the Badge | Photo by Luke Cormier