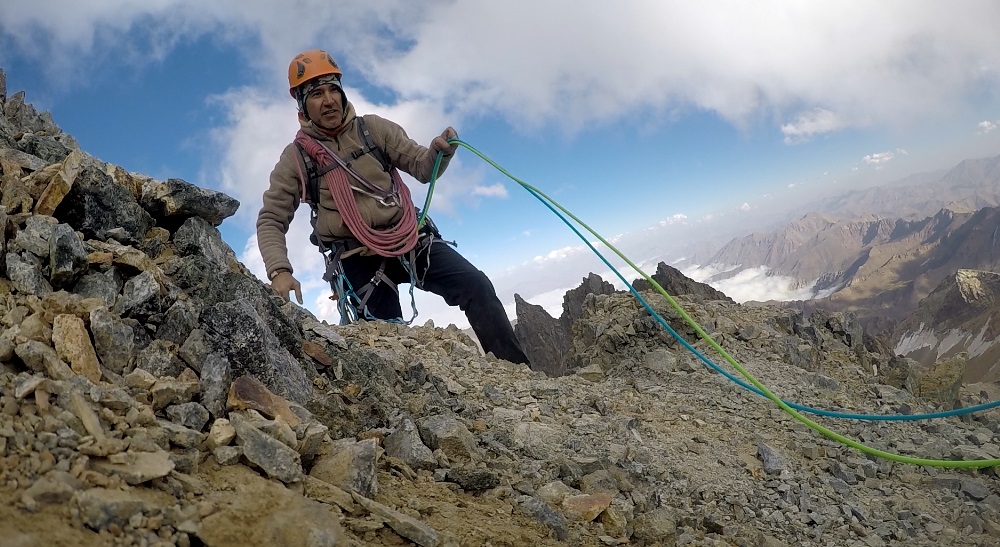 This past August, 49 year old Mohsen Pourghasem, an Iranian paraclimber, became the first adaptive athlete to climb Iran’s 2nd highest peak, Alam Kuh (4848m), via its formidable north face. Mohsen lost 4 fingers on his left hand at the age of 13, and started climbing around 3 years ago, and most of his climbing experience comes from clipping bolts in the world of international para-climbing competition. Mohsen’s kindness shone through during the 2014 Paraclimbing Worldcup, where he made international friends with several American-based Paradox Ambassadors, despite obvious political tensions between the two countries.

Though his main expertise is sport climbing, he also has a passion for exploring larger, natural, outdoor lines. With a bit of experience on other Iranian rock walls such as the Bisotun Wall and Pol-e-Khaab, he decided he was ready to chase his dream of scaling the almost 16,000ft Alam Kuh through technical terrain, up to 5.11c. Partnering with him was his friend Farshad Mijoji (also from Iran) who came with big wall experience from the likes of Trango and Tsaranoro. Their route followed the line of the peak’s first north-face ascent (completed in 1964 by Germany’s, Harry Rost, and Iran’s own, Amir Alai).

They began moving into the Alam Kuh area on August 24th with the plan to continue to Vandarbon camp and start their approach to base camp early the next day. With mules packed, they trekked toward Alamchal Glacier on the morning of the 25th. Since the busiest part of the climbing season had ended, the Alamchal area was quiet, which was welcome news as the routes are known for loose and falling rock. They had along two other friends (Bahram and Mohammad) who were to climb just above, while taking pictures and video of the historic ascent. On the 26th of August, they awoke at 3:30am and left the tents at 4:30, crossing the hazardous Alamchal Glacier and reaching the base of their route around 6:30am. 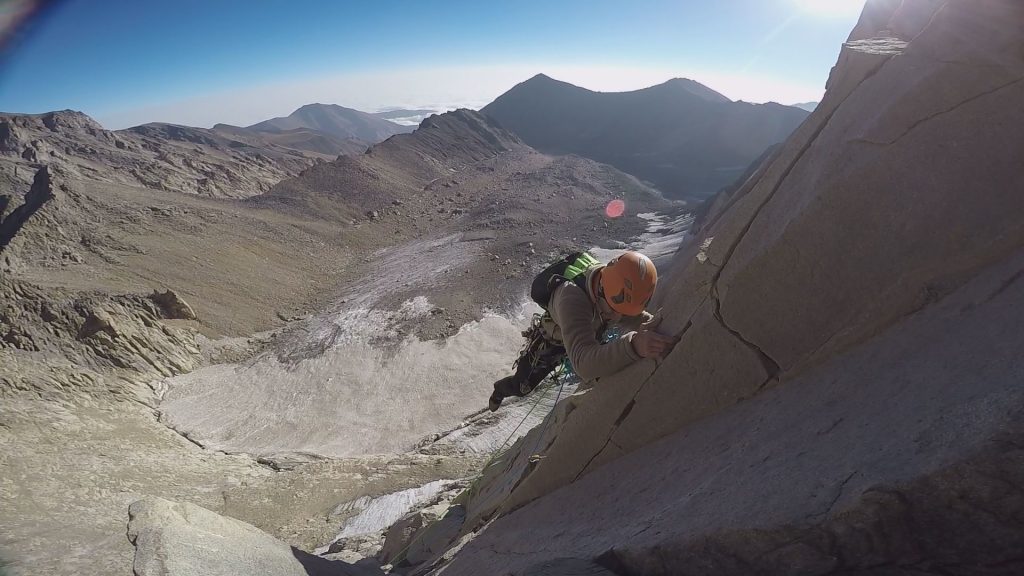 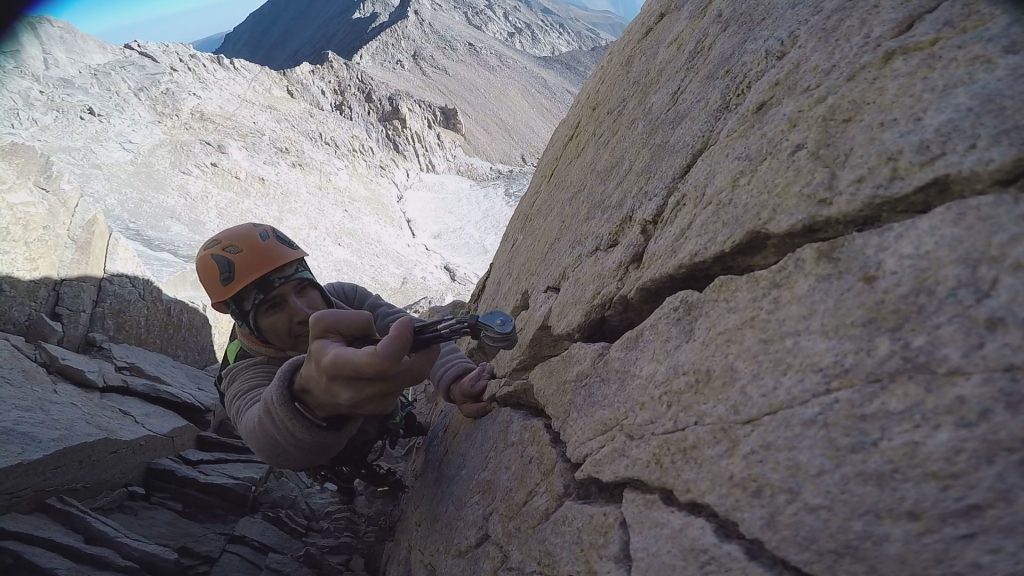 After a few pitches, they decided to pass the camera team, as moving quickly was imperative to make their goal of a one-day ascent. The pair climbed straight through nine pitches before taking a break once it was clear they were making decent time. Despite several close calls with rockfall, as well as icy cracks and holds in the shadowy upper pitches, Mohsen and Farshad topped out the main technical difficulties at 4:30pm, just 12 hours after leaving camp.

“We continued our climb and finished main part of (the) route at 16:30 p.m. (end of 11th pitches). We were so excited and of course I was more excited because this was my first ascent. Farshad had climbed this route 4 times and this was his fifth ascent. He believed this ascent was harder than his previous ones because of cold weather, ice and situation of the holds” he added.

The battle was not over yet though. The remaining 3 pitches to the summit required patience and concentration over loose rock; a difficult task after an exhausting day of multi-pitch climbing, but they eventually stepped onto the summit at 6:00pm.

“I shouted joyfully and was so excited at the summit. Yes, first para-climber…me…Mohsen Pourghasem could ascent to Alam Kuh north face wall.” 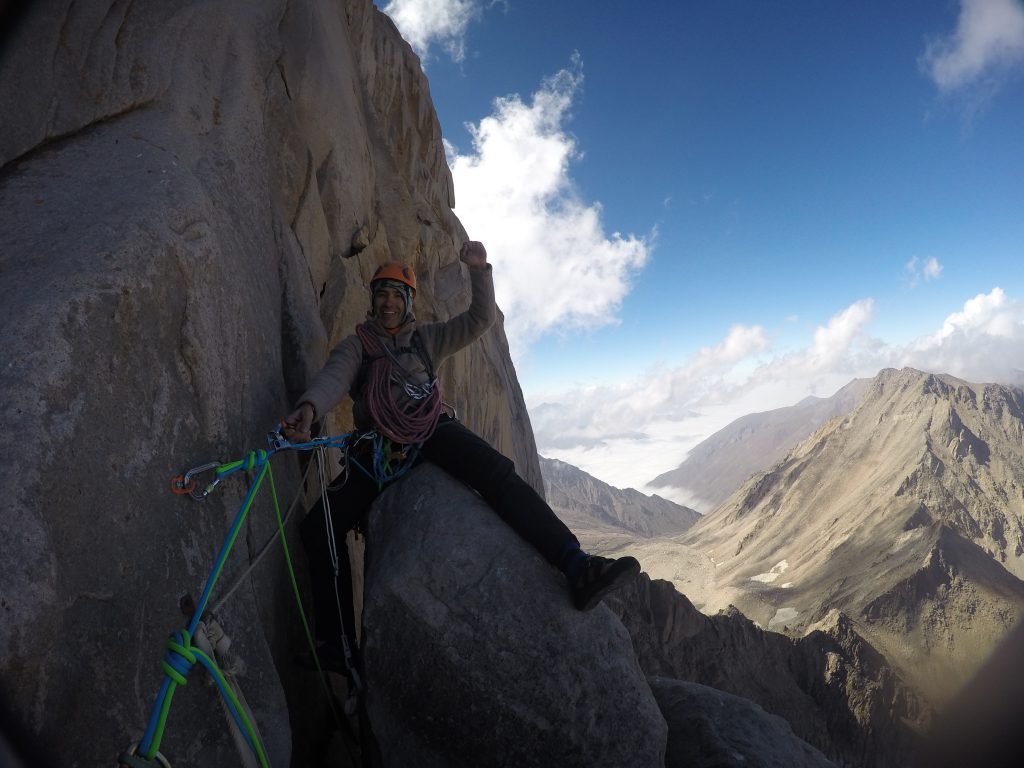 Congratulations on this historic and impressive climb Mohsen (and Farshad)!!!

For more stories and adventures, make sure to frequent our blog. If you’d like to get involved in helping other adaptive athletes reach their goals, please visit our webpage to donate, volunteer, or even become a fundraiser yourself! And don’t forget to follow us on Facebook, and Instagram.